If any of my family or friends could see me now, I would die of shame, I thought 15 years ago as I stepped into that Paris church as a French atheist starting an investigation of the Christian faith.

I had left the Catholic church years before that, when I was old enough to tell my parents I didn’t believe. And in the years that followed, I’d grown rather scornful toward religious believers. They’re not thinking. They’re superstitious. They’re irrational. What a waste of time, I thought. I’ll stay as far away from religion as I can.

Well, that didn’t exactly work out.

The most unlikely circumstances conspired against me: A random meeting with a stranger while hitchhiking on the other side of the world led to a long-distance relationship with an American model and actress who claimed to be a Christian—and believed in abstinence before marriage. The only way to be with her was to disprove her faith, to leave her antiquated beliefs behind and be happy together. This led me to read the Bible in an effort to understand it, and it brought me to that church to see what Christians do when they gather. But even as a professing atheist with no intention of converting, I felt some shame even being in the building, as if I had done something intellectually subpar already—being among the religious. Dreadful.

This outlook on religion was partly based on my own prejudice, of course, but also partly fueled by the French culture around me, where being religious is socially acceptable when superficial, but deeply ridiculed when taken seriously. This sentiment dates back at least to the Enlightenment, when French thinkers like Baron d’Holbach said, “To be a good Christian, it is essential not to have a brain, or at least to have one that’s well and truly shrunk” and “All good Christians must be in a state of sweet simplicity, predisposing them to believe things that are not in the least bit credible without a second thought, on command of their spiritual guides.” Today, we find these same presuppositions in the writings of extremely popular French atheist philosopher Michel Onfray, who says, “I do not despise believers. I find them neither ridiculous nor pathetic” but goes on to call them “naïve and foolish” and accuses them of being filled with “neuroses, psychoses, and . . . aberrations,” suffering “a personal mental pathology . . . ushering in a wholesale pandemic.”

With such generalized insults floating in the air I breathed, I eventually found a chair and sat down in that church, trying to listen and observe. I remember the worship well enough: The excellent music of the modern worship band sounded nothing like the pipe organs of my childhood. But as for the sermon, I must have been too absorbed in thinking I shouldn’t be there because I do not remember a single word. All I remember is that as soon as he finished speaking, I thought, I have seen enough; let me escape the building before anyone comes to speak with me. And I walked down the aisle toward the back door.

But right as I was stepping out, I was overcome with a wave of chills from my stomach to my chest to my throat. I stopped in my tracks, halfway out the door, my body covered with goosebumps. This is ridiculous, I thought. I need to figure this out. I turned around, closed the door, and walked straight back to the pastor.

“Hi, my name is Guillaume,” I said abruptly.

“Robert Baxter. Nice to meet you,” he replied.

“Yes,” he said with a bemused smile.

“Well, how does that work?”

He told me he’d be happy to talk to me about it if I would be interested in setting up a meeting.

I was. And thus began a series of meetings, in his office, discussing God, Jesus, and the Christian life as I tried to confirm the Christian faith was intellectual suicide.

The first problem was that Robert wasn’t stupid. He was well educated, he expressed himself calmly, and he explained his ideas clearly. And yet he believed that God exists, that Jesus is the Son of God, and that Jesus was crucified and raised from the dead. I greatly enjoyed discussing with him, asking all my questions, and listening to him articulate his Christian worldview.

The first time we met, he gave me a little booklet he’d written with questions on the basics of Christianity and Bible references for readers to find answers themselves. I did that. And every answer I found led to more questions. I would write these on a sheet of paper, which turned into a pile of sheets to unpack at my next discussion with Robert.

After speaking with Robert and reflecting on our talks for several months, I changed my mind on a number of points. One of them was the Christian view of marriage and sex, which Robert presented in a more attractive light. While I was still no fan of abstinence, I accepted that the Christian view was neither repressive nor intolerant. Most importantly, my focus wasn’t so much on whether or not Christianity is good but on whether or not it is true. And on that front, too, I had to let go of a few misconceptions.

First, I suspected that belief in God was incompatible with science—or that it should be supported by science if it were at all true. Confronted with an actual believer and facing the task of thinking about any scientific reason I may have to disbelieve, I realized that none of my scientific knowledge (acquired in scientific prep school and during my engineering degree courses) conflicted with the existence of God. As a matter of fact, little, if any of it, was even relevant to the question. Upon further reflection, I also realized there were many things I knew that weren’t derived from science, so the existence of God couldn’t be dismissed just because it’s not established by science. I later did discover there are good arguments for God’s existence with premises based on science (such as the so-called Cosmological argument, arguing from the beginning of the universe to a first cause and creator, and the Fine-tuning of the universe supporting the existence of an intelligent designer), but for the time being, I simply concluded that scientific proof wasn’t necessary to believe in God.

Another important intellectual shift concerned my expectation for certainty. If God exists, I'd thought, we should be able to be sure. I will have none of this “blind faith” nonsense. We should know it and be certain about it. And while I certainly did not come to accept faith as being blind, I did come to realize that this expectation of absolute certainty was entirely absurd. This standard is unreasonable, and it wasn’t hard to see: I realized there were many things I knew, and I was fully rational in my claim to know them while falling short of this utopian absolute certainty. I knew my name, my date of birth, and who my parents were. I even knew about things that happened before I was born: I knew that my older brother, Nicolas, was born through a C-section because the umbilical cord had been wrapped around his neck, and he came out “blue as a Smurf.” I knew that the Mont-Blanc is 4,807 meters high. I knew that the Bastille was stormed on a July 14—though I always forgot the year. And I knew there is a great wall in China—though I had never seen it. I knew all these things without proof and without absolute certainty. How? Because, in each case, someone who knows told me it was true. Yes, I came to see that personal testimonies are a perfectly valid source of knowledge—a source of knowing, not just believing.

Now, of course, it’s not strictly that simple. There is such a thing as unreliable testimony. And we don’t want to be gullible, accepting just anything because someone says it. To form true knowledge, the testimony (historical or not) needs to be reliable. And clearly enough, the reliability of the Gospels is regularly criticized. That is, in part, why the discipline of Christian apologetics (the defense of the Christian faith) exists: to respond to these criticisms. It is a field I engage in today, and I can defend the reliability of the manuscripts: their dating and authorship, the historical and geographical descriptions they contain, etc. But I didn’t at the time, and that’s another interesting point I came to appreciate: You don’t need to know the case for the reliability of a source in order to know something on the basis of that source’s testimony.

Now, are there critics who say this testimony is unreliable? Yes, there are: Holocaust deniers. And do they offer arguments of their own? I’m sure they do, although I haven’t read any of them for myself so far. But since I haven’t read them, I don’t even know what their arguments are. Therefore, I’m not able to refute their arguments. And yet we would never say that I don’t know the Holocaust happened just because I am not familiar with the defense of the reliability of the historical testimony regarding the Holocaust. That is because the authority lies in the trustworthy sources themselves, whether or not I know the sources are trustworthy. Similarly, I maintain that I could know the truth about what Jesus said and did based on the reliable historical witness preserved at least in the Gospels.

And so I did. I came to trust their testimony and believe that Jesus was who he claimed to be: the divine Son of God who came in fulfillment of the Old Testament prophecies and lived a perfect life, died on the cross, and was raised to life again three days later, as testified by those who saw him then.

In short, this was my intellectual shift regarding evidence we need to know Christianity is true. I discovered that we need a lot less than I’d expected and that we have a lot more than I’d presumed. I believed, and it was no intellectual suicide.

Now, I should add that this intellectual shift wasn’t everything. A genuine Christian conversion involves a change of heart as well as a change of mind, and beyond my intellectual acceptance of God’s existence and Jesus’s resurrection, I also needed to embrace the Christian Gospel—repent of my sin and trust in the risen Jesus for eternal life! But satisfying the demands of the intellect was a necessary condition for me, and one that thankfully was met. This satisfaction has grown more and more during the 15 years I’ve thought about these questions.

I discuss them and tell the full story of my conversion—detailing my change of mind and heart—in my book Confessions of a French Atheist: How God Hijacked My Quest To Disprove the Christian Faith (Tyndale Momentum, June 2022). 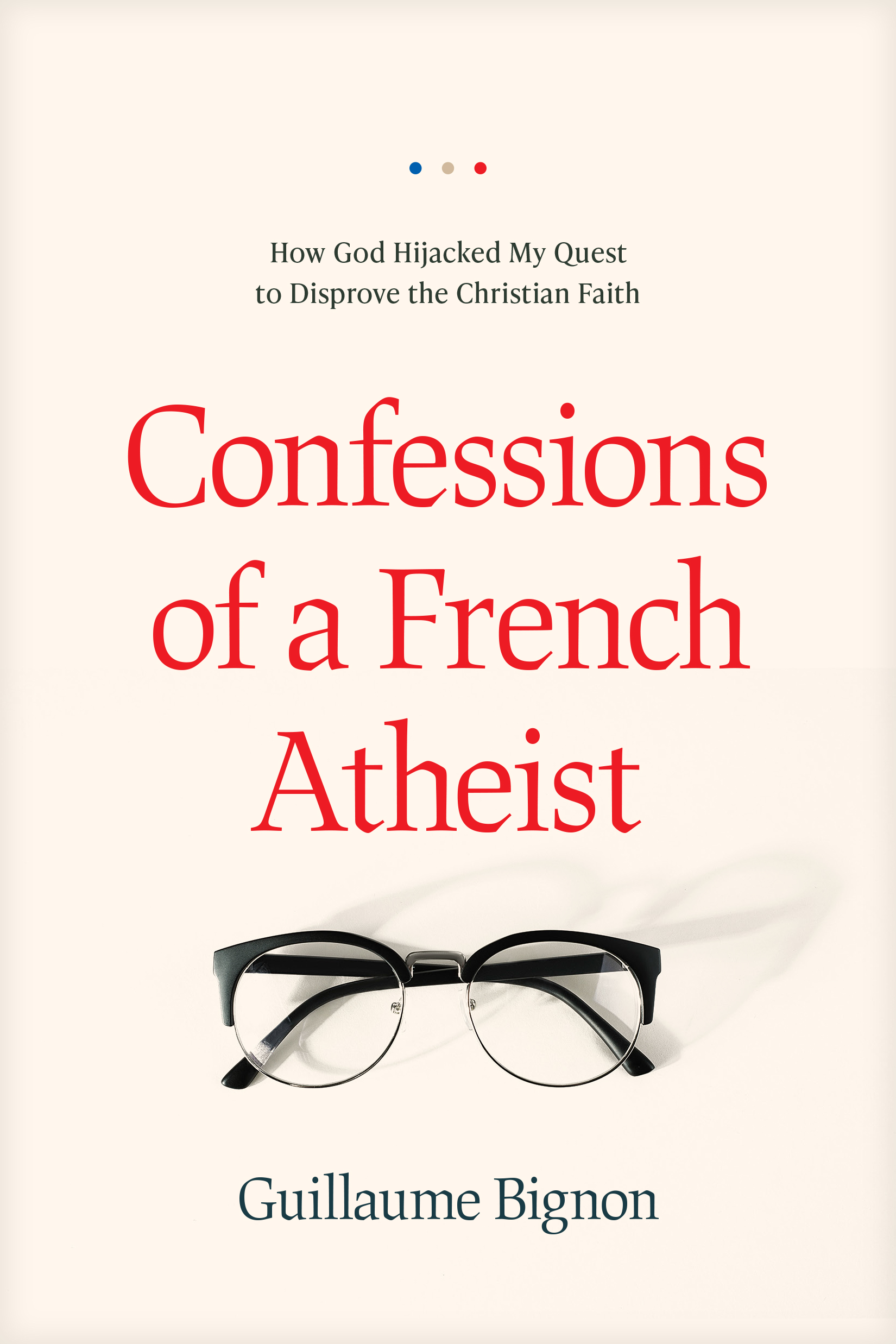 Dr. Guillaume Bignon was born and raised in France, where he studied math, physics, and engineering science. He currently works as a software engineering manager. After a wholly improbable conversion from atheism to Christianity, Guillaume earned a master's in biblical literature with an emphasis on the New Testament and a PhD in philosophical theology. His areas of interest include the metaphysics of free will, natural theology, and soteriology. Guillaume is an executive committee member of Association Axiome, a society of French-speaking Christian scholars. He and his wife, Katherine, have five young (and adorable) children.

This content first appeared on BibleStudyTools.com and is used here with permission. To view the original visit: https://www.biblestudytools.com/bible-study/topical-studies/how-i-discovered-that-faith-isnt-intellectual-suicide.html